The Cohen Iris Garden at the Overland Park Arboretum & Botanical Gardens is a must-see in the spring. 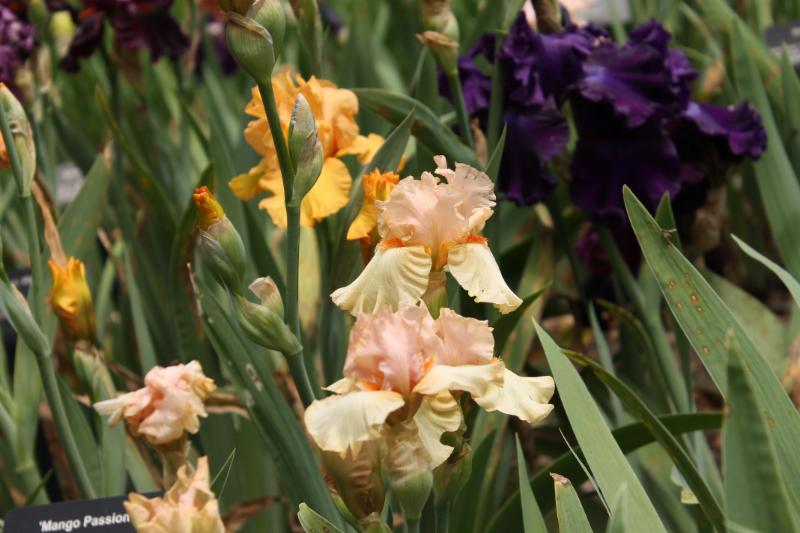 It all began around 2000 or 2001, with a 70th birthday present for Barton P. Cohen. Mary Davidson worked with Ruth Doherty, then Arboretum Supervisor, to establish a garden for her husband Bart. Iris were chosen and a garden was planted across Margaret’s Pond, in what we now call the West Pond Bed (creativity lacking in that name) The iris did not perform well there, and slowly declined. However, in 2004, the iris garden was lovely and successful enough that Debbie Hughes and Carolyn Ash, with the Greater Kansas City Iris Society, stopped in to propose an idea. The American Iris Society was planning their 2009 annual convention in Kansas City. Debbie was interested in planting a “convention garden” to be toured and new varieties trialed. In 2007, new beds were tilled and approximately 400 varieties planted. This activity prompted the idea for a new and improved iris garden. Robert Whitman, with Gould Evans was hired to create a design for the current location and Mary Davidson stepped up to the plate again.

The new location was designed to showcase as many species of iris that will grow in this area, as well as have interest year round. In addition to iris, many perennials, shrubs, trees and annuals enhance the garden. The garden was built with funds from the Barton P. & Mary D. Cohen Charitable Trust and some proceeds from the 2008 Stems: A Garden Soiree fundraiser. The Greater Kansas City Iris Society donated over 300 varieties of iris and their members, including Debbie and Scott Hughes have assisted in maintaining the garden ever since.
Most people are familiar with the iconic tall beared iris, and there are thousands of different varieties. My favorite types are the miniature tall bearded iris as well as the pseudatas – a group of hybrids between Japanese and pseudacorus iris. As I type this, I’m thinking the Siberians and Louisiana iris are favorites as well. (Take a minute to google these types and see for yourself how many interesting plants are out there).
Iris grow from a rhizome, which is defined as an underground stem. Even though the definition says underground, they can often be seen crawling just on top of the ground or half in/half out. If you dig one up, you will find long root tendrils reaching down into the soil. Most iris need well drained soil, especially in the winter. Well-drained means not sitting in water. The original iris bed at the Arboretum did not have well drained soil, so most of them rotted and died. Most iris also need full sun. There are a few iris species and hybrids that don’t fit this prescription. Do your research if not sure what your iris need. The Louisiana iris mentioned above can grow in wet or boggy soil. Some of the Siberian iris have understated, yet lovely, fall color.
If you visited the gardens in the spring, you may have seen the miniature Iris reticulata. These are a bit different than the iris discussed above because they grow from a bulb, not a rhizome. The tiny bulb iris flower just a short time, but are a needed burst of color in the still gray landscape. During one of our iris discussions several years ago, one of the members didn’t look as favorably at the bulb iris as they do those growing from rhizomes, but we consider them necessary for color in the landscape. Debbie helped select another iris to help control erosion in an area. She mentioned she had never thought of iris as a ground cover or for erosion control.
The garden was dedicated in 2009. Also, in 2009, the Arboretum hosted the 5th annual sculpture exhibit. Part of the exhibit were two Tom Corbin bronze sculptures – Jazz I and Jazz II. The miniature dancers were mounted on 2 boulders placed in the garden and seemed to be dancing through the flowers. The Arboretum was able to keep those sculptures as permanent residents due to donations from the Mabel Fitch Charitable Trust and the Friends of the Arboretum.
The iris are nearly ready to make their show. Next visit, take time to enjoy their colors. If you are inspired, stop in the Environmental Education and Visitor Center and jot down your favorite variety on one of our comment cards.
Karen Kerkhoff
Arboretum Supervisor